Ringette :
I started playing Ringette at the age of 6 in Kitchener, Ontario. Halfway through my first season, I already knew my love was as a goalie. I played with the Kitchener Ringette Association until I went away to University of Toronto for school. While in University, I enjoyed stints with the Waterloo and Sudbury Ringette Associations, and eventually headed out west to backstop the Edmonton WAM! in the National Ringette League for 10 years.

I also helped form the NRL back in 2002, 2003.
Roller Hockey
I started playing roller hockey (or inline hockey) my first year of University, which quickly lead to several trips and tournaments around North America. The World Championships for Women started in Rochester, New York in 2002 where I helped Team Canada capture our first of 4 Gold Medals with a 2-0 win in the Championship game. We have travelled to the following countries to attend World Championships each summer: USA, France, Colombia, Czech Republic, Germany, China, Spain and Italy.
Ice Hockey
I was the first female to play high school boys hockey in Central Western Ontario, and chose University of Toronto's varsity hockey program to continue my playing days. A few years playing for the Scarborough Sting and the Mississauga Ice Bears in the National Women's Hockey League, then I moved out to Edmonton to play on the Edmonton Chimos in the Western Women's Hockey League.

I also helped form the NWHL back in the late 1990s as Ontario and Quebec women's hockey merged their leagues.
Career
I finished a 4 year undergraduate degree at the University of Toronto (majored in Psychology and Criminology, minored in Women's Studies), then headed to Osgoode Hall Law School and got called to the Ontario Bar in 2003.

Pairing my first love of sport, and second for law, I was called to the Alberta Bar in 2004 after moving out to Edmonton and became the first in-house lawyer for the Edmonton Oilers (NHL) in 2006. As the company grew to become now what is Oilers Entertainment Group (OEG), which includes the Edmonton Oilers, AHL’s Bakersfield Condors, WHL’s Edmonton Oil Kings, ICE District, and Rogers Place, I head up OEG’s Legal Department and recently was promoted to the Executive group. 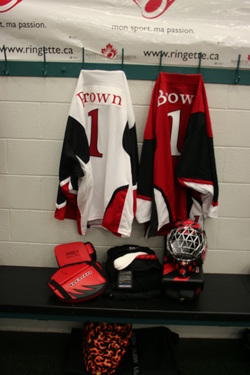