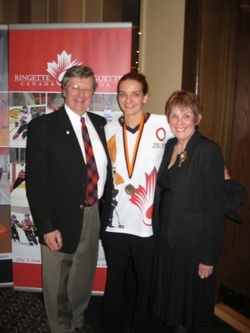 Co-Owner of 5-Count Ringette Goalie Instruction, Keely is a leader in the Ringette community as both a goalie and a goalie instructor. Highlights of Keely's accomplishments include:

- Inducted into the Ringette Canada Hall of Fame in 2014 in the Athlete category
- Inducted into the Alberta Sports Hall of Fame in the Athlete category (first Ringette Athlete) in 2018
- 29 years goalie instructing experience, 37 years playing experience
-  12 years on the Canadian National Ringette Team, 10 years on the
Canadian Inline Hockey Team
-  NRL champion and Goalie of the Year honors, goalie for the Edmonton
WAM!
-  World Ringette Championship Player of the Game and Tournament
honors
-  Author of “The Complete Guide to Ringette Goaltending” and "The Complete Guide to Ringette Goaltending's Ringette Goalie Warm Ups, Conditioning and Off Ice Skills"
​- helped form the NRL back in 2002-2003
- Goalie Coach for the U19 Team Canada West team for the 2012 U19 World Championships
- Goalie Coach for the 2013, 2015, 2017 and 2019 National Ringette Teams
- Assistant Coach for the National Inline Hockey Team

Click here for more info on Keely Brown or email her at keely@ringettegoalies.com 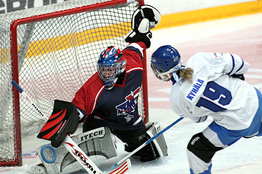 
Click here for more info on Heather Konkin or email her at heather@ringettegoalies.com 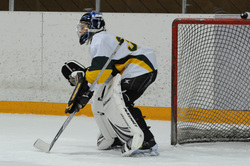 Alissa is very excited to be joining 5-Count as a Group Leader for the August camp in Beaumont. Highlights of Alissa's accomplishments include:

- Years playing Ringette: 13 years (10 with Lethbridge & Medicine Hat; 3 with the University of Alberta)
- Instructing experience: 3 years as the Goaltender Coordinator/Sports Nutrition Presentor for U of A Summer Ringette Camps and 2 years as an instructor with 5-Count
- Just finished her BSc in Nutrition and Physical Activity at the U of A and is working as a nutritionist and personal trainer in Edmonton 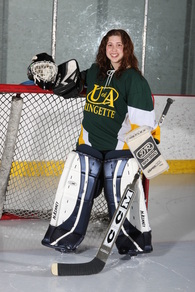 Brienne can't wait to teach at the 5-Count Ringette Goalie Camp this summer! Her energy and enthusiasm will be very appreciated on the ice. Highlights of Brienne's accomplishments include:

- Years playing Ringette: 11 years with various Edmonton teams including a year
with the University of Alberta.
- Has been teaching Ringette goalies for 6 years. Started teaching with Edmonton Ringette and has taught various clinics and summer camps with the U of A, ATC Goaltending and 5-Count.
- Is working on finishing her last few courses this year at the U of A, getting her BA in Sociology.
- Currently working with the Edmonton Oilers in their ticketing department down
at the Ballpark as a Customer Experience Rep. 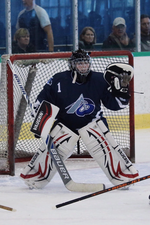 Some of the highlights of Kailey's ringette career include: 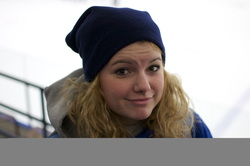 Jessi is going into her 15th year of ringette. Jessi has been a goalie for 12 of her 15th years.  She has played for the University of Alberta for one year and is hoping to make the team again for this upcoming season.  The U of A team won the University Challenge Cup last season to become the top university team in the country!

Jessi has been a goalie for 12 of her 15 years, and has played9 years at the AA level. Jessi has been picked up for Team Alberta to compete at the Canadian Ringette Championships three times and has won a medal all three of those years.

Heidi is really excited to be joining the 5-Count Ringette Goalie Camp team! Highlights of her accomplishments include:

- Has played ringette for 10 years - 7 years in Sherwood Park, 2 for U of A, and the previous year with Edmonton Relit.
- Has coached ringette for 3 years - 3 years with Sherwood Park, 2 with U of A Ringette summer camps, and 1 with Gold in the Net in St. Albert.
- Is finishing her last year of her BSc in Psychology. She hopes to then get her Master’s in Speech Pathology.

Starting her ringette career in Red Deer, Brea is now heading into her 17th season. A late entry into the AA program, Brea started playing AA for Calgary in her third year belle.

Highlights of Brea’s accomplishments include:

Living in the Calgary area and playing in Central Alberta, Grace has joined the 5-Count ranks graduating from 5-Count goalie trainee to 5-Count Instructor. Highlights of Grace’s accomplishments include:

Bobbi has played ringette in Calgary her whole life. She has played ringette for 16 years now and has been a goalie for all 16 of those years. She entered into the Calgary AA program at a young age and has never looked back. She is currently playing in her 6th year as a Rath goaltender and is looking forward to a competitive Western league in the National Ringette League. 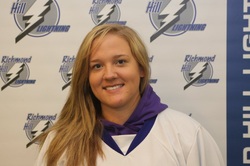 Ashley has enjoyed a few seasons now under her belt with the Richmond Hill Lightning in the NRL. Off to a great start this year, Ashley is excited to be joining 5-Count as we expand into the Ontario market.

Ashley Vlarr has played Ringette for 15 years at the A and AA level in Southern Ontario, including for the Richmond Hill Lightning in the NRL. She has been a goalie instructor for both the National Ringette School and the Richmond Hill Ringette Association for 3 years, and is looking forward to joining 5-Count to teach more Ringette goalies in Ontario.

Ashley attended Niagara College for a diploma in Recreation and Leisure and currently works in a greenhouse in the flower industry. 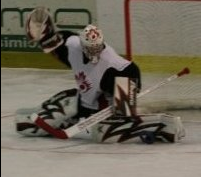 Ashley Miller was born in St. Marys and currently plays for the Richmond Hill Lightning in the NRL. She is attending the University of Waterloo studying Environment and Resource studies and Biology. Highlights of Ashley's Ringette experience include:

- 14 years playing experience out of a few associations including St. Marys, Stratford and Waterloo
- She's been to Eastern Canadian’s once (placed second), and National’s twice (bronze and silver)
- She was a member of the 2009 U19 Canada East team, and the 2011 Team Ontario for the Canadian Winter Games
- Instructing Experience: Ashley has helped instruct for individual teams in St. Marys and Waterloo and has instructed at Ringette camps in St. Marys

Stephanie is thrilled to be joining the staff of 5-Count for the camp in August in
Richmond Hill. Highlights of Stephanie’s accomplishments include:
- Years playing Ringette: 13 years, 11 years as a goalie for Cambridge at the AA
level, 3 years goalie instructor experience

MeganI started playing ringette in houseleague when she was 8. She became a goalie half way through that season and never looked back.

Megan has been coaching since she was 14, first as a volunteer and eventually was hired at two different goalie training facilities, working with goalies aged 5-18 and from Houseleague level all the way up to AA.

Megan is starting her first year at Trent University in the fall, studying psychology but plan to play and coach ringette throughout her university years. 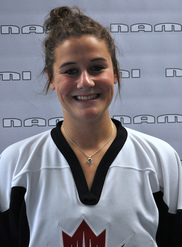 Jasmine is one of the young up and coming goalies in the Ringette community. Fresh off backstopping Team Canada East to a U19 World Championship Gold Medal in December 2012, she was also recently named as a goalie to the Senior National Team and is training to compete in the World Championships this coming December, 2013 in North Bay.

Jasmine is very excited to be joining 5-Count to help support our Ottawa and New Brunswick regions, teaching younger goalies all the finer details she has learned over her career.

Hailey Moore grew up playing ringette in West Ottawa and then Nepean, and has been playing for 17 years. She is currently in her second year of playing in the NRL for the Waterloo Wildfire.

Hailey also has many years of experience coaching goalies and instructing at camps. 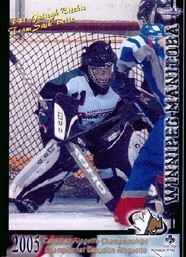 Juliegh has minded the net in Saskatoon for the Wild in the NRL for the past 5 years and is currently taking a year off to complete her Masters. Joining 5-Count for the Saskatoon camp in October, 2011, Juliegh is excited to get out and teach some more Ringette goalies. Highlights of Juliegh's accomplishments include:

Carmen is very excited to join the 5-Count team and to start working
with the goalies in Saskatchewan!

Highlights of Carmen's Ringette goalie career include the following:
- Has played ringette for 14 years
- Currently playing for the Open A Regina Blackouts
- 3 years experience coaching goalies
- 4th place finish at the Canada Winter Games in 2011
- Attended 4 National Championships for Team Saskatchewan, winning gold in 2007
- 3 silver medals at Westerns
- Named to the All-Star team at Westerns in 2012
- Currently completing herdegree in Human Kinetics at the University of Regina before applying to medical school 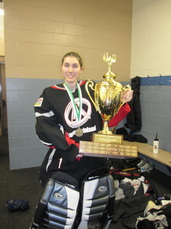 Sasha is very excited to be heading up our Lower Mainland branch of 5-Count in B.C. fresh off her 2012 NRL Championship Gold Medal. Highlights of Sasha's accomplishments include: 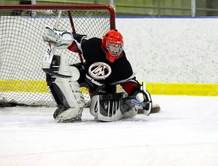 Lower Mainland, BC
Tara is very excited to help instruct with 5-Count in BC starting this fall! Tara
has been playing ringette for 12 years, and has been a goalie for the past 8
seasons. She has been playing for Lower Mainland Ringette League's AA program for 8 years, going into her second year of U19 this season.

Tara competed in her hometown during the 2012 Canadian Ringette Championships, playing for Team BC, and represented BC again in the 2013 CRCs.

Tara hopes to have a long career playing and instructing ringette.

Samantha (Sam) Kell started playing ringette at age 8 at PCRMRA, and began the goalie
life at age 10. She is heading into her third year of U19 this coming seaosn. Highlights of Sam's Ringette goalie career include the following:

Sam is looking forward to help instruct with 5-Count this season.