Tips and Drills for Ringette Goalies

Instead of having people sign up and pay a set fee to receive access to tips and drills for ringette goalies, and for an opportunity to have their specific questions answered - if you are using this portion of my website, and if you are an adult with a full time job, feel free to instead contact Ringette Canada and offer up a donation to the Ringette National Team in exchange for access to this page.

Click here for Ringette Canada contacts - and any donations are greatly appreciated due to the fact that each individual athlete competing for our National Team is required to cover our own costs for training, travelling and competing.
To submit a topic or question for consideration and to be featured on this Tips and Drills for Ringette Goalies page, click here.

Is the One Pad Slide Right for Ringette Goalies?

So many Ringette goalies, parents and coaches are talking about doing this thing called the "one pad slide", where after a goalie makes a save (or perhaps even before a shot comes on net), she stays down in her butterfly, lifts the outside leg, and pushes herself across the crease on her other knee towards where the ring is.

Since I've played both Ringette at the National/International level for a number of years, as well as ice hockey at the University and professional level for women against the best female ice hockey players in the world for the last 17 years, I feel that I am a pretty good source when it comes down to looking at the different skills needed for ice hockey vs Ringette.

To be as blunt as I can be - the one pad slide comes from hockey. It is perfected by male hockey goalies in the NHL who average  6'2" or higher in height. The majority of the goals in hockey are scored on rebounds and scrambles
in front of the net. A 6'2" male goalie playing hockey who stays on his knees and shuffles about still has his shoulders at the height of the cross bar, and is taking away those shots in close where players on the other team jam away at the puck in front of him. The one pad slide is a hockey goalie technique, much like "paddle down" and the "2 pad stack". I use the one pad slide in ice hockey, same as I use paddle down for scrambles and rebounds in close. However, I rarely, if ever use either of these techniques in Ringette.

In Ringette, most of the younger goalies are around 5 feet tall, and I myself at 5'8" am on the taller side for Ringette goalies. Also in Ringette, a lot of the players, even the very young players, use a Ring Jet stick and now
have the capability and desire to constantly shoot the ring for the top corners (roofing it rather easily sometimes, even at young ages). Finally, in Ringette, the majority of the players stab the ring - which means when they've stabbed the ring, they are better able to put a really good fake in for a goalie coming across to the shot, and if a rebound comes out, they are less likely to bat at the ring, and more likely to try and stab the ring first before shooting the ring again. Batting the ring is a quick reaction, stabbing the ring and shooting it generally takes a second longer.

All of this translates into a very important fact for Ringette goalies. I think it's most important for Ringette goalies to stay on their feet as much as possible when moving side to side. As the players get stronger and better, they
are more able to roof the ring over a goalie who is already down in her butterfly, and they are also more likely to fake and reach around the goalie to put the ring in the wide open net when the goalie slides by. The more we goalies stay on our feet when we move, the more net we take up with our shorter height, and the more we are ready to react to fakes. Since Ringette players generally try to stab the ring instead of batting at it, unless the rebound is really close to the crease where the goalie currently is, it makes much more sense to get back to your feet (starting with your outside leg) and t-push over as fast as you can in a controlled manner, hands out towards the shooter to get ready for the next shot or fake.

In saying all this, a lot of Ringette goalies still think it's cool to do a one pad slide - we see it done on tv, we see it being taught by hockey goalie instructors - and it is a good technique to practice balance and control in the
crease, and to help warm up the legs - so if a Ringette goalie has all the other techniques down, then I don't mind them wanting to work on a one-pad slide for fun - but in my mind, it's the same as teaching a 2 pad stack in Ringette. The 2 pad stack would be a very last ditch save attempt in Ringette since once a goalie goes into the 2 pad stack, she is toast on fakes and opposing teams will catch on very quickly to just fake the shot and walk around her to put the ring into the open net.

Similar for a Ringette goalie who does a one pad slide in her crease during a game - if it's before the shot even comes, her top corners are wide open as she's sliding over. If it's on a rebound that's in close to her crease where she is, less of an issue if she needs to get there quickly, but good to get back to her feet once she gets there, because if the player stabs the ring, she'll be able to skate around the goalie or pass to her teammate for a shot. But if it's for a rebound or pass to the other side of the net, she'll be much more effective as a goalie to get back to her feet (or stay on her feet) and use a strong t-push to get to the other side in good goalie balance and control so
she's covering as much of the net as possible, ready for the high shots, able to react to the low shots, and able to react to a fake or another pass.

So this is why at our 5-Count camps, we rarely teach the one pad slide as a technique until the goalies get much older, more advanced and taller - and we really only teach it for fun, and for an option just for rebounds that are in
close to where the goalie made the first save. To teach smaller, younger goalies the skill that we don't encourage using in their game, and really only using rarely if you use it at all, would be missplacing our focus and one of the
reasons we teach Ringette goalie specific Ringette goalie instruction for the skills they need to be successful in Ringette, instead of hockey goalie instruction and techniques for Ringette goalies.

Whew, ok rant is over. Any questions, just Contact Us.

How to Deal with a Big Loss 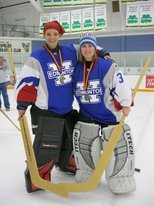 Clearly the best part of being a goalie is those games where we get tons of shots, stand on our head, keep our goals against to a minimum and everything in the world is going our way. However, we all know we can't win all the time.

Every now and then (or more frequently depending on how strong your team is and how much stronger other teams are), we are in net for those games where the ring just seems to constantly find its way into the back of our net. It happens to all of us - from the beginner, Bunny goalie who is still learning how to hold her stick, all the way up to us NRL goalies and even when we play at Worlds.

Ringette is a team game, but it is true that sometimes we can steal the win as a goalie for our team, or on the other end, we can also have a horrible game or even a pretty good game personally, and let in a lot of goals. Ringette players have a lot of control over the ring, and they are able to hit the corners with their shots. Whether it's our "fault" or not when we lose big, goalies still seem to bear a large feeling of ownership when their team gets blown out of the water in a game.

As goalies, we play a position where almost everything we do it noticed and evaluated. Players can sometimes hide in the background, play a few good shifts, get a goal and somehow have a "great" game. Goalies can make a few amazing saves, then let in a squeeker goal, and focus only on the goals they let in. As goalies, we need to be the most mentally strong on a team so that we can stand in net all by ourselves in our crease and rebound as quickly as possible after letting in a goal, no matter what the score is. Even harder, is going back in net the game after we've let in a lot of goals, or have gotten pulled. Here are some tips for how to deal with a big loss or a disappointing performance in a game so that you can get right back to the top of your game the next time you're in net.

1. Remember why you play Ringette. You play to have fun. You play to have the chance to compete and to be with your friends in the dressing room and on the ice. Try to be excited to come to the rink and step back on the ice - here is your chance to go out there and give it another try and have some fun for a while.

2. Remember that you are a good goalie. Every goalie out there has made some really neat saves and has had some really good games. Focus on those games, remember how that felt and how much you enjoyed it. Try to get that feeling back - that you are a great goalie and you'll be able to step in and do better this time. Recognize that the last game didn't go well, but that this is a new game and a new day, where you can work hard and do your best to have a better outcome. Every goalie lets in goals and has bad games, so you aren't alone. But that's the joy of goalies, that we have a new game the next time to start over and be great once again.

3. Tell yourself you want the shots. As goalies, when we aren't feeling confident, we sometimes tend to sit back in our crease, lean back away from the shooters, and don't want the other team to shoot. Instead - tell yourself you want the other team to come in and shoot on you. You want to be standing at the top of the crease. You want to be leaning towards the shooters, challenging them to take a shot so that you can make that save. Tell yourself that, and your body will start to believe you and act accordingly.

Past Topics:
"How To Deal With A Big Loss"

" Why Should Our Association Get Ringette Goalie Training"

"How to Stay Focused During a Bad Game or Penalties"

"How to Keep Your Stick on the Ice"